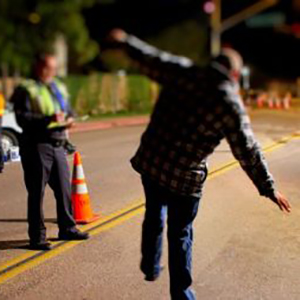 In a San Diego downtown accident fortunate to deal no harm to anyone, two officers responded to the scene involving a possible drunk driver. The alleged DUI driver knocked over two cones and had significant damage to the front end of his car. He had been drinking beer at a bar and was on his way home just after 8:00 PM. Because of the smell of alcohol and the certain manner of the accident, the officers assumed it was alcohol-related and asked the accused driver to do a series of field sobriety tests and blow into an Alco-Sensor IV. The respectful U.S.Navy man agreed, beginning with the field sobriety tests.

The officer instructed the alleged DUI driver to follow the tip of his finger with his eyes, who was unable to smoothly pursue while his eyes began to bounce. When asked to recite the alphabet, the accused driver recited it twice, with somewhat of a melody. In the walk and turn test, he was unable to maintain heel to toe contact and did not perform the test as demonstrated. Finally, he was swaying side to side during the one leg stand test. The officer then asked the alleged DUI driver to do a breathalyzer test, resulting in a 0.17% BAC, a little over double the legal limit. The accused driver was handcuffed and booked into Central San Diego County Jail for 23152(a)VC – driving a motor vehicle while under the influence of alcohol.

While the consequences could have been more severe, especially when an alcohol – related incident results in an accident, the client’s attorney was grateful to get him off with minimal punishment. The alleged DUI driver was only ordered to pay the minimum fine and have an ignition interlock device on his vehicle for only six months. His San Diego lawyer also was able to reduce the probation to 3 years and have him do only 1 net day of public service program. No jail time, no vehicle impound, no house arrest, no 6-9 mo. program, no expensive SCRAM alcohol-free bracelet, and no 1-3 years of IID. Especially while ser