No Jail Time for DUI with Excessive Driving Speed

Home » No Jail Time for DUI with Excessive Driving Speed

No Jail Time for DUI with Excessive Driving Speed 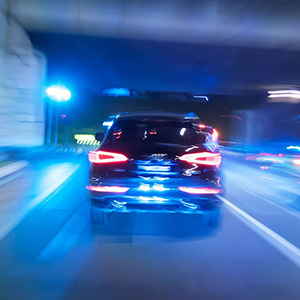 After 1:30 AM, two San Diego DUI officers were on routine patrol entering onto I-8 eastbound from Lake Murray Blvd. The DUI cop’s attention was drawn to two high speed cars driving alongside one another, one in the #1 lane and one in the #2 lane.  They accelerated the patrol car to catch up to the high-speed vehicles and positioned the vehicle in the #1 lane approximately 200 yards behind the suspect vehicles.  The officer had to obtain a pace of 105+ MPH to catch up to the vehicles, and activated the emergency lights just before pulling over the accused driver.

The officer approached on the driver side, requesting the driver roll down his window.  Upon contacting the driver, the DUI officer noticed the strong smell of an alcoholic beverage emitting from inside the vehicle.  The alleged DUI driver was requested to step out of his vehicle and meet the deputy near the right side of the patrol vehicle.  Prior to conducting a series of pre-field sobriety test questions, the accused driver claimed to have consumed “one Corona” prior to driving.  He had red and watery eyes, and a slurred speech.

The standard battery of field sobriety tests were conducted.  The first was a horizontal gaze nystagmus, where the accused DUI driver displayed a lack of smooth pursuit, swayed forward and back throughout the test.  A one leg stand was conducted, where he again swayed both forward and back and side to side.  The alleged DUI driver then swayed both forward and back and side to side in a rhomberg test.  Due to the failure of the tests, a PAS test was given, providing two breath samples with results of 0.90% and .085% BAC fifteen minutes later.  The accused DUI driver was transported to San Diego County Jail.

The alleged DUI driver unlawfully had 0.08 percent and more, which is a violation of California vehicle code section 23152(b).  It was further alleged that he drove 30 or more miles per hour over the maximum freeway speed while DUI, a violation of California vehicle code section 23582(a).  The excessive speed enhancement carries a mandatory consecutive 60 days in jail.  His DUI lawyer had the prosecuting attorney drop this and the DUI charges, in exchange for just a plea to only vehicle code section 23103(a) per 23103.5 [reckless driving – alcohol related].  The accused DUI driver was placed on only three years informal probation to not violate similar DUI laws, complete the minimum drunk driving alcohol program, pay the minimum fine & assessments totaling $1,324, and do only 24 hours of volunteer work.  No jail time, no home confinement, no trash detail, no vehicle impound, and no probation officer.