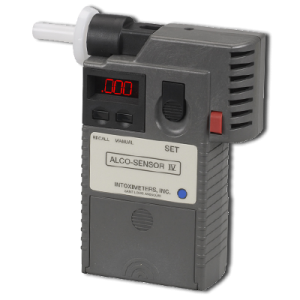 Before you decide to drink and drive, know your rights. If you are 21 years of age or older, please remember you do NOT have to blow in the hand-held gadget. Why give San Diego county DUI police more evidence to try to convict you than what they are legally entitled to and what you are legally obligated to provide?

Simple attorney advice – Do NOT blow in this!*

*You only have to blow if you are on San Diego DUI probation or are under 21 years of age.

What is this? It is a Preliminary Alcohol Screening Test (aka “PAS” test).

What is it not? It is not the big breath or blood test you are required to do if arrested for a San Diego DUI.

Under California law, the PAS is lawfully only a field sobriety test (aka “FST”). San Diego DUI Lawyers know this but most people do not…until it is too late.

California Vehicle Code Sections 23612 (h) and (i) clearly limit the use of any PAS test result:

(h) “A preliminary alcohol screening test that indicates the presence or concentration of alcohol based on a breath sample in order to establish reasonable cause to believe the person was driving a vehicle in violation of Section 23140, 23152, or 23153 is a field sobriety test
and may be used by an officer as a further investigative tool.”

As a field sobriety test, the PAS is statutorily defined as an investigatory tool to assist a San Diego DUI officer in deciding whether to arrest you for DUI.

San Diego DUI cops will try to talk you into it. Just say you’d love to help them but your San Diego DUI lawyer has advised you NOT to blow in the field.

Don’t be fooled by what the police say.

If you are 21 years or older, you can agree to a PAS on a San Diego county street yet be deemed a legal “Refusal” if you fail to later agree to submit to a chemical test of blood or blow into a larger breath test machine once you are arrested for DUI.

To try to prevent the PAS test from being admitted, or to attack the lack of reliability and trustworthiness of the PAS result, here are 6 possible San Diego DUI attorney legal breath test defenses or attacks.

A San Diego Superior court or California DMV should only admit test results from a Preliminary Alcohol Screening (P.A.S.) device by first affirmatively finding proof – required by at least 2 prosecution witnesses – of all of the following foundational facts:

(A) The particular device was in proper working order;
(B) The test was properly administered; and
(C) The operator was competent and qualified.

Regarding the first Adams test prong, the Government must prove that this particular device used was in proper working order by way of all Breath Test/preliminary alcohol screening (P.A.S.) test maintenance and complete calibration logs along with non-hearsay testimony from the Breath Test/ P.A.S. Maintenance and Calibration Officer to lay the foundation for proper records.

Regarding the second Adams test prong, the Government must further show that the test was properly conducted in accordance with the manufacturer’s guidelines and instructions.

The subject must also be continuously observed by the Breath Test/P.A.S. operator for at least 15 continuous minutes before testing, at a minimum, in order for the test to be properly administered.

Thus, for a San Diego county DUI prosecuting attorney to show that an operator was competent and qualified, the Government must prove that:

(A) The operator had been properly trained, meaning he or she is “qualified”; and

(B) The operator strictly performed the test in accordance with the law, with the manufacturer’s guidelines and instructions, and with his or her training, meaning he or she is “competent.”

Without in-person and competent testimony by both the Administering officer and the Breath Test/P.A.S. Maintenance and Calibration officer establishing compliance with the standards of the Government and the Manufacturer, there lacks proof of the necessary foundational facts.

2. Failure to Continuously Observe You Prior to 1st San Diego DUI PAS Test

Was there a proper 15 minute continuous observation by this San Diego DUI officer?

According to every manufacturer and breath test training, for proper administration of any breath test, the subject must be observed by the San Diego DUI Breath/ P.A.S. breath test operator for at least fifteen (15) continuous minutes prior to testing.

If used to administer an evidential test, “the subject must be kept under observation for 15 to 20 minutes prior to testing to ensure complete dissipation of any residual alcohol that may have been in the subject’s oral or nasal cavity.” [Intoximeters Inc. Alco-Sensor IV Operator’s Manual, “Preliminary Procedures,” page 5]

“To prevent mouth alcohol from affecting a test, make certain that the subject is not allowed to put anything in their mouth for the 15 minutes prior to taking a test.” [Lifeloc Technologies FC20 Manual, “Observing the Subject,” p. 9]

The lack of any mouth-alcohol detector or slope detector makes the PAS an inaccurate hand-held gadget.

“The breath sample shall be collected only after the subject has been under continuous observation
for at least fifteen minutes prior to collection of the breath sample, during which time the subject
must not have ingested alcoholic beverages or other fluids, regurgitated, vomited, eaten, or smoked.”
[California Code of Regulations, Title 17, § 1219.3]

There are many false positives which can register when a subject blows into the unreliable hand-held PAS gadget. Someone with no alcohol can also eat white bread or soy sauce which causes a false positive PAS “breath level” reading.

A San Diego Superior court should also determine whether or not the manufacturer’s requirements were actually followed. This is necessary to make sure: (A) the Breath Test/PAS is functioning and maintained properly and (B) the breath test was properly administered in accordance with the manufacturer’s guidelines and instructions.

It is therefore appropriate for your San Diego DUI attorney to consider the manufacturer’s requirements of the San Diego DUI PAS device used to test your breath.

In one California case, maintenance records for the PAS instrument showed, at the time of the driver’s test, the device was producing readings differently for alcohol content by .002 percent than a calibrated sample even though the deviation was within the variances allowable for breath-testing instruments under Government regulations. [Brenner v. Department (2010) 189 Cal.App.4th 365 (2010) 116 Cal. Rptr. 3d 716]

The Brenner court considered the Government’s contention and argument, then rejected it.

The Government, however, contends plaintiff’s showing was insufficient because he “produced no evidence that the alleged breath-test variance violated Title 17.” It maintains that the 0.002 percent variance shown by the calibration records and Mark’s testimony are irrelevant as a matter of law because the pertinent regulations allow the use of breath test instruments with accuracy readings of plus or minus 0.01 percent (Regs., § 1221.4, subd. (a)(2)(A)), and testing agencies are required to report results to the second decimal place. (Regs., § 1220.4.) Accordingly, the GOVERNMENT argues, “[t]he .002 variance . . . is legally irrelevant because the statutory scheme allows for variances from the `true result’ that far exceed .002 percent.”

The Government’s argument fails because it conflates the regulations governing instrument accuracy with those that establish legal BAC levels for drivers of motor vehicles. Regulations section 1221.4, subdivision (a)(2) addresses the accuracy standards for devices used to measure breath alcohol content and requires accuracy of plus or minus 0.01 percent of the true value. (§ 1221.4, subd. (a)(2)(A).) Pursuant to section 1221.4, subdivision (a)(2)(A)1, the results of device testing “shall be used by a forensic alcohol laboratory to determine if the instrument continues to meet the accuracy set forth in Section 1221.4(a)(2)(A).” While the regulations require forensic testing agencies to ensure their instruments meet a minimum level of accuracy, nothing in the regulatory scheme precludes a driver from introducing evidence that the instrument used to test his or her BAC deviated by some measure less than 0.01 percent of the true value. Nor does any regulation bar a trial court from considering such a deviation in determining whether an administrative license suspension is supported by sufficient evidence.

It is the Government’s burden to prove that a driver was operating a vehicle with a BAC at or over the legal limit. It is not the driver’s burden to show at least a possibility that his actual BAC was below.

5. For any San Diego PAS Breath Test Result to be Admissible in a Court of Law, there must first be an Affirmative Showing by Competent & Qualified Witnesses that the Device Was Checked for Accuracy Every 10 Days, the Standards for Calibration were established, and the Results were not different than the Established Value

For a Breath/PAS test, proof of the accuracy checks must first be presented. Here, it was not. If presented by the two prosecution witnesses, the proof would lack foundation and/or the records would likely show untimely checks.

Was the San Diego DUI Breath/PAS Test device checked for accuracy in the 10 days prior to this use?

When the San Diego DUI Breath/PAS device was checked, were its results different than the True Value?

In this case, does the Government get past the first Adams test prong?

The Government must prove that the particular device used was timely checked and in proper working order by way of timely Breath/preliminary alcohol screening test maintenance and calibration logs showing compliance with standards.

In Coniglio, the officer testified he had been trained on the use of the device and the proper operating procedures. However, the Court noted the testimony in that case did not meet the foundational requirements: “There was no testimony about how the device was maintained or whether the standards for calibration were established.”

6. Failure to Properly Administer Tests – Failure to Collect 2 Samples with .02% of each other

“Procedures for breath alcohol analysis shall meet the following standards:

(1) For each person tested, breath alcohol analysis shall include analysis of 2
separate breath samples which result in determinations of blood alcohol concentrations
which do not differ from each other by more than 0.02 grams per 100 milliliters.”

Evidential test protocols in San Diego county typically require 2 test results within a .02 tolerance of one another. This is echoed by California law.

The above attacks may be available for most San Diego California DUI PAS tests. If you are under 21 or on DUI probation and you’re obligated to blow, these attacks may help you and your San Diego DUI lawyer.